Bleachers and Stadium Seating, or at least the idea of them, originated in ancient Greece and was expanded upon in ancient Rome. While not the classic bleachers, wooden or aluminum, that we think of – the design ideas we follow today were born of the seating of ancient Greece and Rome. That horseshoe-shaped design we 21st century fans place our bleachers in comes to us complements of the Greeks.

The cheap seats, also affectionately known today as the nose-bleed section, come to us via the wisdom of the Romans who were adept at packing in the spectators. Those early ‘bleachers’ were often fashioned of stone, built into existing hillsides, providing fans and spectators a riser view of the events.

Since then modern man has used architectural and engineering principles, as well as state of the art technology and creativity to develop stadiums that rival even the Colosseum (circa 80 AD). Let’s take a trip around the world and explore some of today’s most unusual bleacher offerings.

Most Eco-Friendly Bleachers: Located in Curitiba, Brazil, and known as the Brazil Eco-Stadium, Janguito Malucelli, it is famous for being the first of its kind in Brazil. What makes it so special? Each individual bleacher seat is built into the hillside and surrounded by grass. While wood and iron were used in the design, it is all reclaimed or recycled.

Oldest Bleachers: With the Guinness Book of World Records Certificate to prove it, Sandygate Road is the oldest stadium in the world features 1800s bleacher’s style testifying to its age. Opened in 1804, the stadium is located in South Yorkshire, England and is home to Hallam Football Club.

Largest Bleachers: Rungado May Day Stadium in Pyongyang, North Korea, is pegged at the world’s largest stadium (non-auto racing) seating 150,000 people some of them in classic bleacher style seating. Completed in 1989, it was originally used to as the main stage for the World Festival of Youth and Students. Unrelated to its capacity and bleachers, the exterior features a lovely floral design.

Ugliest Bleachers: Or maybe, we should say least attractive bleacher seating, are the seats in Balchik Stadium in Bulgaria. Home of the Chernomorets Balchik Football Club, Balchik Stadium seats 6,000 fans in bleacher style seating that appear to be remnants of the bleachers from a medieval jousting event.

Most Colorful Bleachers: In Aveiro, Portugal, is the colorful Estádio Municipal de Aveiro, wins the prize for the most colorful and vivacious stadium seating. Throughout the venue, the seating colors are randomly placed and include green, red, blue, yellow, black, and white giving the illusion of an energetic crowd even before they arrive!

Most Wanted Bleachers: The most wanted bleacher seating is desired not for luxury but for a blend of nostalgia and uniqueness. Have you guessed it yet? The most wanted seating is a bleacher seat on the Green Monster at Fenway Park, home of the Boston Red Sox. Why? Because they go so fast that only a lucky few will ever be able to say “I watched the Sox from atop the Green Monster.”

Most Expensive Bleachers: Not the most expensive bleachers here, but the most expensive stadium seating for an event was $81,000, the cost of a single seat to the 2010 NBA Finals at Staples Center for game seven of the Celtics versus Lakers. There you have it, certainly not a complete tour of the world’s most unique stadium bleacher seating, but a starting point to inspire you to explore the wonderful world of bleacher seating!

Get a FREE Quote!

Great view of the show 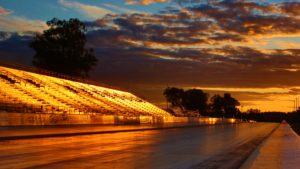